Most-viewed celebrity posts of all time on real hairstyles.net

A very quick calculation of topics that were most eye-catching shows the following (a closer look at stats later may cause some subjects to move up or go down):

That’s as high as we can count for now. Watch as we add onto the list (and verify our findings) plus break down the numbers into specific stars like how Country includes Taylor Swift, Meghan Linsey, Carey Underwood, Miranda Lambert, Lady Antebellum, Jennifer Nettles and too many to remember right now!!!

As we predicted, Janet Jackson is yo-yoing between her buzzed haircut and slightly longer styles. JJ’s pixie cut with bangs works perfectly for her role as the new face for Blackgama’s fur coat campaign. The beauty of the crew cut was evident when Ms. Jackson was vacationing in Sardinia, Italy earlier this summer. Without 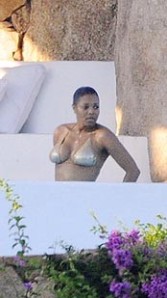 doing a thing to her hair, the pop star was free to swim, sail or just sit on the beach with her new boyfriend Wissam Al Mana. When it’s time to be on stage, Janet simply polishes up the do with a shine enhancer (like she did on the American Idol finale). Some star watchers compared Janet today with Toni Braxton in the early ’90s. While Toni’s short cut was a tiny bit longer and tinted in brownish red, we have no idea how Janet will make her short cut different in the days to come!

You may be wondering why we’re so fascinated with buzzed haircuts. We really don’t know the answer, but it could be because the celebs who wear them are some of the gutsiest women we know. Of course they have the freedom to cut off their manes because they look great in any hairstyle.

We’re wondering if this is the making of a mini trend with Janet joining other bare heads like Solange Knowles, Agyness Deyn and the beautiful creature of Splice. Today we were going to feature them all together but there’s too much good stuff to pack into one post. So… here’s an update on the one and only Janet from the infamous Jackson family. The Nasty singer was first spotted in a crew cut on May 20th, so naturally the next day her new do dominated the headlines of style and gossip news. There were only a few candid photos (not very flattering, above right) showing Ms. Jackson in her barely-there hair that had a super-high shine.  A few days later (above center) it looked like Janet had grown out her hair overnight when she appeared at a London preview screening of Why Did I Get Married Too? With a long full crown topping the buzz, there’s no question that the look was artificially enhanced. The star’s sheer magic just goes to show you that even a buzz cut can look longer than it really is. It helps to have access to a celebrity hair designer, but real women could do the trick with good hairpieces and a talented hairstylist to show them how.

Another day after her hair was buzzed (June 3rd in Harlem, left), the star was spotted in a fabulous fake on the set of For Colored Girls Who Have Considered Suicide When the Rainbow Is Enuf. For her third movie with Tyler Perry, the super-short style is slightly longer on top and has long bangs. This style and the wavy upsweep without bangs just goes to show you that it’s possible to get variety with short hair. The new movie coif has to stay consistent but that works out great for Janet who is showing up with similar shortcuts on TV appearances. While she’s getting a break from extensions, we wouldn’t be surprised to see her go long or in-between sometime soon.

Getting back to the buzz, Janet really showed it off at the finale of American Idol. Many reviewers say she stole the show with her shorn hairstyle, trim figure and Michael-style dance moves… not to mention her much-loved voice. Again, Janet enhanced the simple short with a glossy finish.

Finally, we wanted to compare a couple of Janet’s old hairstyles with the new. While she looks cute in long ringlets and bangs, the excess hair overwhelms her delicate face.  Another time she was wearing dread locks for a visit with her brother Michael. This time the hair was off the face, which is good, but the length, texture and wide headband were too much for Ms. Jackson.

We could show you plenty of pretty pix of Janet in long hair, but we like to see the soft-spoken star make a strong statement with her hair. Many of you must agree: a poll on Janet-online.com shows 88.88% of fans are in favor of the crop. Don’t worry if the buzz cut annoys you… it won’t be around for long!

Tagged Agyness Deyn, American Idol, buzzed haircuts & how to change them, For Colored Girls Who Have Considered Suicide When the Rainbow Is Enuf, Janet Jackson in Tyler Perry movies, Janet Jackson's new hairstyle, Michael Jackson, ringlets, Solange Knowles, Splice, straight hair with bangs, waves, Why Did I Get Married Too? 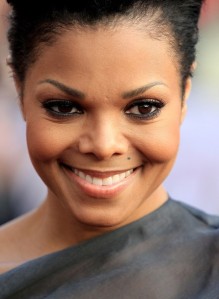 Lee Dewyz may have won American Idol 2010, but the real news is: Janet Jackson’s surprise performance when she wowed the audience with a new ballad and an old Nasty. For the first she was dressed in a fitted black gown (above) but then she stripped down to a skin-tight body suit a la Cat Woman. Her appearance was only one of many that outshined Idol Dewyz. Another reason Ms. Jackson stole the show is her new buzzed haircut. When she first got the super-short style there wasn’t a photo to be found of Janet smiling… in fact

she looked unhappy with her drastic style change (below). A few days later her mood seemed to lift when she attended a special screening of Why Did I Get Married Too? in London (above left). There will be more to talk about tomorrow, so tune in! 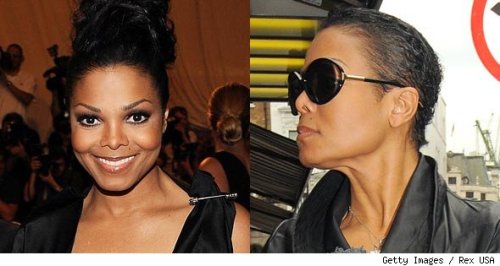 Janet Jackson has joined the ranks of today’s celebrities who are on the cutting edge: Hayden Panettiere, Agyness Deyn, Renee Zellweger, Michelle Williams, Heidi Klum and more. The buzz is because these trendsetters are going short and shorter with their hairstyles. The star do-over will get the same kind of media attention the others have gotten…mainly because they are going against popular opinion (that women have to have long hair to be sexy). Sure, she’s gorgeous with long hair piled into a high crown. But the buzz cut is pretty, easy, fresh and makes Janet look like a new woman! This breaking news couldn’t have come at a better time for the singer/actress who is promoting Why Did I Get Married Too? She just turned 44 and soon will be doing PR for another movie. The new do also coincides with a new romance to replace a 7-year relationship that ended last summer. We know what you’re going to say about the makeover, but tell us anyway!
Photo at right: Rotello/MCP/Startraks from People StyleWatch.