“Britney’s back!” …
that’s what entertainment writers are saying about Ms. Spears. They are referring to the revival of her career, evidenced in her new role as an X Factor judge and her video/ad ‘Till The World Ends (Twister Remix). Others are raving about B’s new bikini bod. While that’s all well and good, we say “Britney’s back” because of her hair and style. In the past she has made bad choices like going bald and letting her extensions fall out. So far her new ‘dos have been pretty good.

As usual, Brit doesn’t stick with one style—she prefers to mix it up. Her Facebook profile photo (at top of post) is sleek, platinum blond and falls just below the shoulders. At X Factor auditions (above), she’s flaunting loose curls and a slightly off-center part (but that day her hair didn’t get as much attention as her cleavage).

Just days ago, the pop princess debuted multicolored dip-dye ends that are everywhere these days with celebs and real women alike. The teal, blue and hot pink tips came out at the iHeartRadio Music Festival in Las Vegas last weekend. Inspired by My Little Pony (and X Factor co-judge Demi Lovato?), her mane stayed streaked on Monday. With all of Simon Cowell’s dislike for Ms. Spears’ wardrobe, we’re wondering if he’ll ban the dip-dye. (But how can he nix Brit’s color scheme without banning Demi’s?) 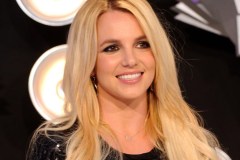 During promos for X-Factor, the bombshell blonde was simply lovely in the straight but full, unlayered locks that she often favors. Also in the pre-season promos, one of her Celebrity Hairstyles was spiral curled for a modern update on crimpy curls. To copy her loose curls, use a waving or curling iron. To keep that soft, sexy look, don’t brush out the curls; just finger them gently into place and spritz on a strong-hold hair spray.

As for the bleached blond color, don’t even think about doing it yourself! Go to a salon and have it done by a professional colorist. The experts at celebrityhaircolorguide.com explain the type of techniques your colorist should use. They recommend Organic Color Systems ammonia-free formula in two shades of white for foil highlights then a regrowth color cream at the roots and sporadically through the ends. For styling products, they recommend Cocktailing Hydrate Leave-In, Gloss Serum and Mousse. 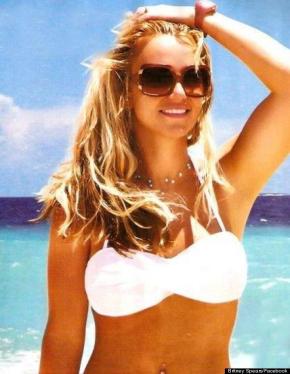 In other news, Brit has been having lots of fun showing off her trim and toned figure. In a recent tweet, she included a photo of herself in a bikini with this message: “Y’all ready for summer to end? I’m definitely not!” A photo that she posted on Facebook recently showed the pop princess in a little top and cut-offs. Even though the pop princess has been working out regularly, US Weekly says the photo of her in a white bikini is four years old!

It doesn’t matter what the critics say about her body. Who needs a stick-thin figure when she has everything else going for her? It will be interesting to see if the former Disney star is able to recoup her title as top pop princess.